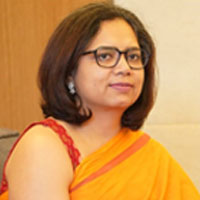 Anu Singh Choudhary is a writer, translator, filmmaker and producer. She has written across formats including radio, TV, films and new media, and has written and directed award-winning documentaries and web-series. She wrote and directed The Good Girl Show, a web-series that was adapted into the award-winning play Antardwand: The Conflict Within and is now being turned  into a novel. The author of Neela Scarf, a collection of short stories, and the memoir Mamma Ki Diary, Choudhary has translated over 20 well-acclaimed titles from English to Hindi.